What's It Like to Co Host the Airplane Geeks 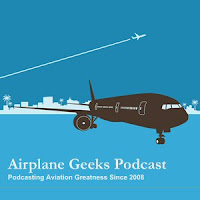 This week I was afforded the opportunity to be a co host on the Airplane Geeks covering for Rob who was away for the weekend. Firstly it was slightly odd being in a four way conversation with people that I have only emailed or heard through the magic of podcasting and social media. Yes, that's right, although I present a short segment for the show, I have never actually spoken to either Max, Dan or David in person. I did have the chance to speak to Rob when he kindly became the mystery guest for our pre Christmas episode.

Well what was it like then recording a programme live which will go out to around 5,000 listener this week. Firstly we started with introductions and some light warm up discussions which I'm afraid have to be kept private at this time. Embarrassingly my microphone failed and I spent 5 minutes flapping about in a total panic trying to get another one set up and working but this didn't seem to bother anyone and they took it in their stride. It was so nice to just chat away to these guys, they really make you feel at home. These same podcasters that have produced over 130 podcasts, all of which I have listened to in the past year or two. (Of course being a fan and a geek means of course I was in aviation heaven and I hope that my constant need to interrupt gets well edited by Max in the final version).

Then it was into the show and although we had no guest we used the same familiar format and used listener mail as our main topics to discuss. Some really good stuff came up and I just wanted the discussion to go on and on, although of course we have a time limit to try and work so, so we had to press on sometimes. Time differences also played a part in me needing to finish at a reasonable time.

Throughout the recording there was the opportunity to have some fun as well and I can now see where all the outtakes come from, its just so easy to jump in with a quick jokey comment and I had to control my own laughter several times.

So it was an enjoyable evening and I can see why these guys give up several hours of their own precious time every week to record a programme for us to listen to. Yes, I still class myself as a listener because that way I try to see if what I am producing is interesting enough. Sometimes it doesn't make the grade and then its Plan B and sometimes you do your best and not everyone likes it. The other thing is that I always seem to learn something from each show, whether its Max's knowledge of engineering, David's stunning recollection of military and historical data or Dan's phenomenal knowledge of airline financing and operations. Let's not forget Rob either, who of course has not only flown almost everything around, but is a CFI and lecturer as well. These guys are serious players in their fields and we are really lucky to have them around.

Anyway, back to the main show, it finished just on schedule and may be one of the shortest episodes recently. (I think there was a certain football game about to start). There was some further banter and then we all signed off and I came back into my lounge in Southsea, UK and a calm descended. I wanted to do it all over again but it was time to sleep as I had to get up at 5am. Sleeping didn't come easy as the excitement of the evening played on and I wondered what the final version would sound like. For Across The Pond, I am in control and able to edit the segment how I like, but here I am relying on Max to edit out my constant uuuhhh's and uummmm's. Oh my goodness will it be OK? Was I OK? Did I interrupt too much?.....Sleep descends on me and I dream about flying.

It was a great adventure and hopefully one to repeat sometime. The team are great and a lot of fun and just remember; they do this for the fun of it and to produce an interesting avaition show for us to enjoy.

Whats it like to Co Host the Airplane Geeks, well just a blast. Great people, great subject and familiarity all made it feel quite natural but make no bones its not as easy at it sounds and you have to stay on the ball. But saying that, I am addicted. Rob, have as many weekend breaks as you want, I've got you covered.
Posted by Pieter at 2/08/2011 08:21:00 pm