This week on Across The Pond on the Airplane Geeks Podcast we get the chance to talk to Dave Lees, Managing Director of Southampton Airport in the UK. Southampton is one of the best performing regional airports in Europe and its no surprise when you use the airport to travel. Last year it won an award for being the cleanest airport in the UK and regularly tops the customer service awards.

Dave is passionate about the customer experience through his airport and shares his vision on making further improvements with us. With over 1.7million passengers a year to satisfy that's no mean feat.

With a single 1.7km runway, Southampton is steeped in history. The very first aircraft to take off from the Southampton Airport site was in 1910 and belonged to local man Eric Rowland Moon. Eric made and tested the Moonbeam 2 aircraft and no one is entirely sure where Moonbeam landed!

But it will remain more famous for its pre and ongoing war efforts from where the Spitfire made its maiden flight.

We also saw some of their new firefighting equipment worth a lot more than double the price of a large family house, fully controlled from within the cab by a single operator. Now that's impressive. 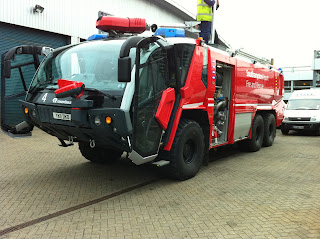 Find out more by listening in www.airplanegeeks.com

You can find Southampton Airport on Twitter and www.southamptonairport.com
Posted by Pieter at 2/08/2012 05:00:00 am