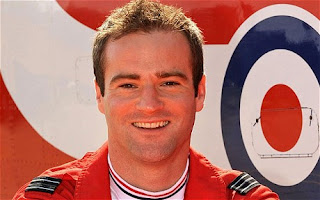 In Europe but in particular the UK, we are all stunned by the tragic loss of Red 4, Flight Lieutenant Jon Egging and his Red Arrow Hawk at the Bournemouth Air Show yesterday.

We send our condolences and thoughts to Jon Eggings family and particularly his very brave wife Emma who saw his last display along with all those associated with the Red Arrows and those enthusiasts who loved them so much.

The son of an airline pilot, Flt Lt Egging joined the Royal Air Force in 2000 and flew Harrier jump jets before joining the Red Arrows. During his time on the front line, he flew operational missions in Afghanistan in support of ground forces. So he really is one of the hero's we all admire and of course go to watch perform at airshows.

I have seen the Red Arrows perform maybe 30 or 40 times and they are one of the best (if not the best) in the world. As someone said yesterday, its not until events like this that we realise that displays we have all become accustomed to seeing still carry significant risk to those who deliver them.

He died whilst steering his aircraft away from houses. This selfless act of bravery bringing his faulty aircraft down in a field away from a populated area demonstrates the courage of Fl Lt Egging. He was only 33, he will remain in our memories.